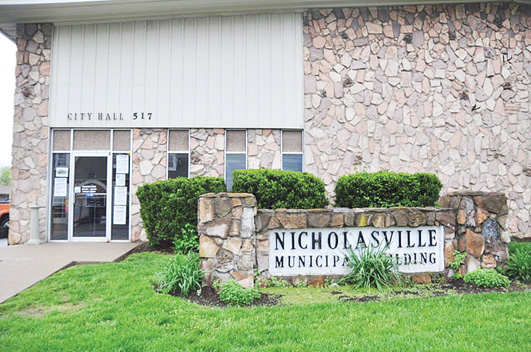 In special meetings Thursday and Monday, the Nicholasville City Commission voted unanimously to leave the rates the same at 18.6 cents per $100 value for real and personal property, and 19.7 cents for motor vehicles and water craft.

Nicholasville City Clerk Kathy Walker said estimated revenue from real property taxes will increase, though, about $130,000 over 2019 to $3.958 million. The state-calculated compensating rate, designed to bring in the same amount of revenue, was 18.4 cents, she said.

Property assessments, though, will vary from year to year.

Commissioner Doug Blackford said the rates have been the same for about nine years, while the city has continued to grow, including a new fire station and a new police station under construction.

There were no public comments about the tax rates.

Earlier in Monday’s meeting, the commission accepted an award from the Kentucky League of Cities for the Nicholasville Police Department scoring 100 on its safety and liability review. KLC law enforcement consultant Brian Nunn said departments are reviewed every three years and about 20 departments will earn a perfect score.

“Remember your police department is doing everything it can to be a 100 percent city,” Nunn said.

In other action, the commission:

— re-appointed Mona Ostendorf as restaurant representative and appointed Bobbye Carpenter as lodging representative to the Nicholasville-Wilmore-Jessamine County Joint Tourism Board.

— appointed Pat Nielsen to the Housing Authority of Nicholasville.

— approved the promotions of Donnelly Barnes, Richard Travis Mays and Lorwn Bewley to lieutenant in the Nicholasville Fire Department.

— Approved hiring Mary Danielle Mullins as a courier for the city Administration Department.

— approved the second reading of an ordinance for itinerant businesses.

— released letters of credit for projects in Fairview Farm and Brannon Oaks.

— authorized a contract between the City of Nicholasville and the Jessamine County Chamber of Commerce.

— approved a contract between the City of Nicholasville and the Nursing Home Ombudsman Agency of the Bluegrass.

— met in closed session for 43 minutes to discuss personnel. No action was taken after returning to open session.