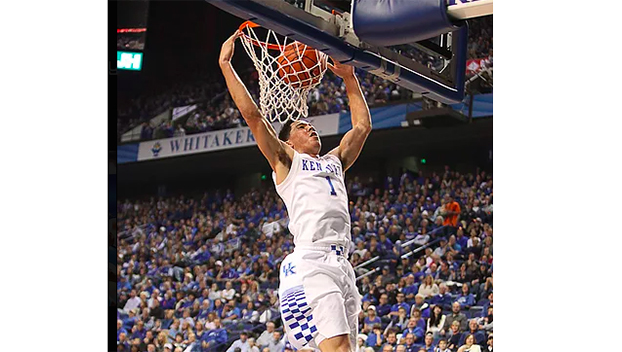 Former UK star Devin Booker is ready to head to the Olympics as soon as the NBA Finals are over. - Photo by Jeff Moreland

Tokyo is next stop for Booker

Former UK star Devin Booker will go straight from the NBA Finals to playing in the Olympics with Team USA and isn’t worried about the short break he’ll have between the Finals and Olympics.

“Next thing smoking. I’ll be there. But obviously not my main focus right now,” Booker said before the NBA Finals started and before Team USA lost its first exhibition game to Nigeria when it was outscored 60-30 from 3-point range.

He’s reached out to the Team USA coaches but also told them he’s glad he’s in the Finals and not at Team USA practice.

“I would love to be there with the guys and I’ll be there soon,” Booker said.

The Phoenix Suns star said playing in the Olympics was a lifetime goal of his.

“I think it’s the most prestigious event that basketball can find. So to be a part of representing your country I think brings you to a whole ‘nother stratosphere,” Booker said. “Just thinking of the guys that have come before us and represented our country, and I don’t think there’s anything better than winning a gold medal.”

Lacrosse may have helped UK’s Burton on the football field

Playing lacrosse for three years (seventh grade through freshman) might have had a significant impact on Kentucky freshman offensive lineman... read more