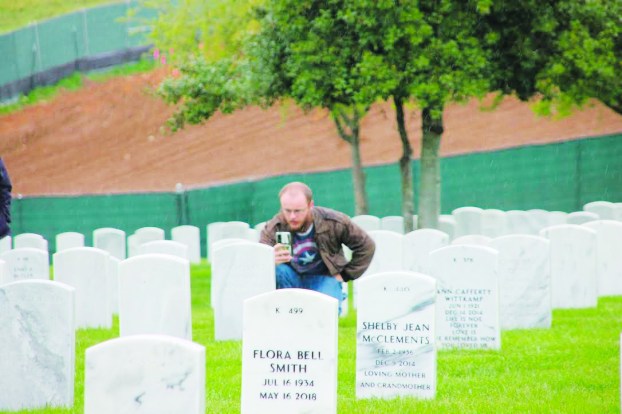 SPECIAL TO THE JOURNAL

CAMP NELSON — In an effort to honor the service of veterans and preserve their records, more than 100 volunteers gathered at Camp Nelson National Cemetery on April 24 to photograph and digitally upload the gravestones of all who are buried there.

More than 19,000 records had been uploaded by the conclusion of the project.

“The energy was amazing,” said Nicholasville resident Shawna Wachs, who served alongside her family and neighbors. “I am amazed that we were able to document that entire cemetery. We do it to preserve the information for future generations, and for family members who live a long distance away who can’t make that trek to see the headstone.”

The efforts at Camp Nelson were part of a larger project by “Just Serve” volunteers and members of The Church of Jesus Christ of Latter-day Saints.

Approximately 200 volunteers photographed and documented more than 30,000 military and civilian gravestones in Nicholasville, Danville, Mount Sterling, Lexington and other Central and Eastern Kentucky locations. All information was recorded through a genealogical database called Billion Graves, one of the foremost resources for GPS-tracked cemetery headstones.

“Most of my work was organizing and taking information,” said U.S. Air Force Reserve Maj. Tim Baxter of Nicholasville, one of the project organizers. “As we spoke to people coming in, I mentioned to them that this is a very special place and to make sure to give it the respect it was due. To have people coming out to perform this service for people who are like me, but who have passed on, was tremendously rewarding and satisfying.”

Camp Nelson itself holds a special place in Baxter’s heart.

“I’m always in awe when I go out to this cemetery,” he said. “[My wife] Ruth Ann and I sometimes go out alone. We’ll just sit and look across the rows and rows of symmetrical white grave markers and just give thanks to those who have served their country.”

“The cemetery itself was immaculate. [The cemetery staff] went beyond … you could tell they had spent extra time and care getting ready for us.”

When volunteers learned that the day’s forecast suggested hours of rainfall, many arrived as early as 8 a.m. to ensure they had extra time to complete their service. Even when the rain did arrive, it didn’t deter those present from their mission.

“Many of us went home soaking wet, but it was fun,” Shawna Wachs said. “There was a lot of positive energy in doing something good. We’ve needed that with all that’s gone on [in the past year].”

Tim Baxter shared that as the last volunteers left and it began to rain in earnest, he drove through Camp Nelson to make sure no one was left behind.

“Way back in the corner of the cemetery, I saw a lone man still down taking photographs, and it was raining pretty well,” Baxter said.

With 300 grave markers left to go, Baxter got out in the rain and helped photograph the remaining graves with his fellow volunteer.

“What impressed me was that this person was there — he was going to finish after everyone else was gone. It wasn’t a social thing for him. He had a work ethic and a level of commitment, and he thought ‘I’m gonna get this done no matter the weather.’”

After uploading photos to the BillionGraves app, volunteers plan to spend even more time going through the entire photo collection to make sure each headstone image gets correctly transcribed to text on the Billion Graves website. This makes it possible for family, friends and genealogists around the country to see the information online, along with the accompanying GPS coordinates, so that they can pinpoint the exact location of ancestors or historical figures they might be researching.

For more information on future volunteer opportunities in the community, visit JustServe.org.

By RANDY PATRICK The Jessamine Journal Saturday is Armed Forces Day, and Parks and Recreation will honor current members of... read more