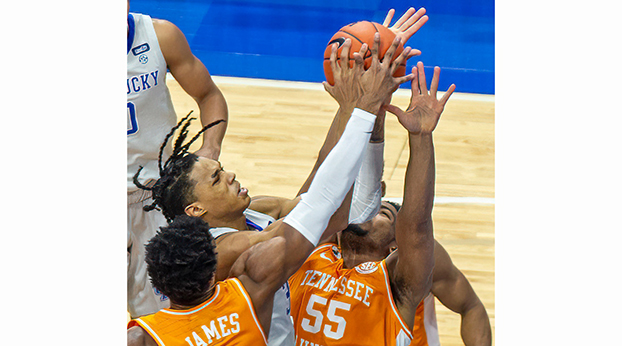 Kentucky coach John Calipari is along for the ride and has been enjoying the journey, especially during the past three weeks.

“I’m happy with the climb right now,” Calipari said. “I’ve been happy for three weeks, we just needed to break through and win a game. But they’re coming together as a team, they’re figuring each other out, we’re figuring them out. So, we’ll see from here.”

“The team is coming together and the reason they’re coming together is that they’re playing for each other,” Calipari said Friday, ahead of the team’s contest at Tennessee set for Saturday. “… We came here yesterday and practiced and had a good practice. There was no gnawing of the teeth. They were excited to be in the gym again.”

In the last meeting between the two border rivals, the Volunteers rallied from a 10-point deficit in the second half and left with a double-digit victory for their sixth win in the past nine games against the Wildcats. Tennessee freshmen Jaden Springer and Keon Johnson combined for 50 points in the previous meeting.

“You can’t let him straight-line drive because we can’t help you,” Calipari said. “We have to stay in front. You can’t get bullied. The other guys are hopefully playing better team defense than we did at that point. But they’re good. They scored 50 points. Two players (scored) fifty. The one thing of all of the tape that I’m watching now, they’re making threes, too. So, you can’t just say, ‘collapse in the lane.’ Because if they make a ton of threes, they’re really hard to beat.”

The Wildcats plan to be more aware of their surroundings when it comes to defending the two freshman guards and Tennessee’s entire lineup.

“I feel that I can do more this game, blocking shots and adjusting their shots, them coming in the paint,” Kentucky freshman forward Isaiah Jackson said. “I feel like I play a big role in this game, me and Olivier (Sarr) with trying to deflect shots and keep them out of the paint.”

While Springer and Johnson are a concern, Calipari added the Wildcats have to be more aggressive this time around against the Volunteers.

Because of a winter ice and snow storm that has battered both states for more than a week, the Wildcats departed for the two-game trek to Nashville and Knoxville last Sunday. Calipari likes the way the team has remained focused amid the unique traveling arrangement.

“You try to have spaces where they can (be)  together,” he said. “We talked about it (bonding).”

Calipari also is back to enjoying coaching again and is anxious to see how high the Wildcats can climb at Rocky Top.

“Let’s see where we are,” he said. “Let’s keep learning about each other. Let’s see what we have to do to keep this climb going because that’s what it is. It’s about this climb.”

Keith Taylor is sports editor for Kentucky Today. Reach him at keith.taylor@kentuckytoday.com or Twitter @keithtaylor21

Vanderbilt made a run at Kentucky but the Wildcats never flinched and held on for an 82-78 victory over the... read more