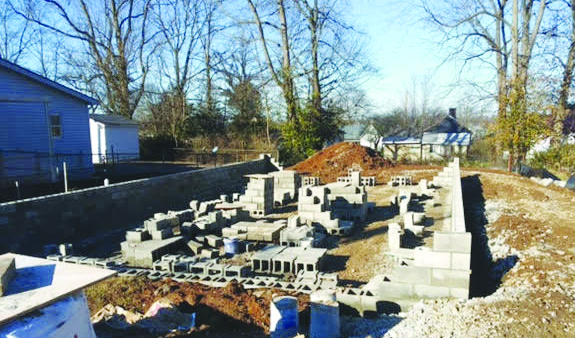 This photograph shows the construction site on Lorraine Avenue in Nicholasville, where contractors have begun working on the foundation of Habitat for Humanity's first Jessamine County house in almost 10 years. (Submitted photo)

As 2021 gets underway, a local charity’s new year resolution is to build a new home for a deserving despite the challenges of COVID and its effects on construction costs and restrictions on volunteering.

Just before Christmas, Habitat for Humanity of Jessamine and Garrard Counties hired a contractor, G & L Construction of Nicholasville, to begin laying the foundation for the house on Lorraine Avenue in Nicholasville.

It is the first local Habitat house to go up in almost 10 years.

Leanne Prout, executive director of the local affiliate, said the group hopes to raise the walls in February and complete the construction in time for the family to move in by summer.

Prout said that once the foundation is finished, they will let it settle and take a break before doing more construction.

“Hopefully, we’ll be able to hit the ground running and not run into too much rain in the spring,” she said.

Prout said the foundation work, which began a few days before Christmas, wasn’t intended as a holiday gift, but it was nice that it worked out that way.

The coronavirus has resulted in obstacles to constructing the home. Habitat houses are usually built by volunteers, sometimes a large group who come out on a weekend to frame the house, for example. But because of the pandemic, Habitat for Humanity International has put in place rules to limit volunteers on a construction project to no more than a few regular volunteers. And since the group has been doing home repairs instead of building projects, it doesn’t have many.

“We can’t open it up right now for the public to help because of that, but I’m hoping that now the vaccine is out, we can start getting new updates and regulations from international,” said Prout, who is recovering from the virus herself.

Another COVID-related challenge has been the cost of materials and construction.

The estimated cost of this house has gone up about 40 percent since they initially raised the money to build it, Prout said.

But they have had more money trickling in. There was a fundraiser in September at the Bluegrass Sportsmen’s League’s property, the Jessamine County Chamber of Commerce made Habitat the beneficiary of this year’s Christmas Tree Trail fundraiser, and the group has received grants from Kentucky Utilities and First Southern. But they still need to raise more to complete the project.

Because of security concerns, Habitat can’t identify the family or allow them to be interviewed, but the family consists of a single mother and her four children. They’ve never owned their own home before.

“She’s held the same job for years and years, and is a great worker and very dedicated,” Prout said.

One hurdle they’ve been able to clear is to avoid having the kids, some of whom are older, have to change schools.

“This family is able to stay in the schools they’re in, which is a blessing,” Prout said.

Prout said the house project, the first in a decade, is being dedicated to the affiliate’s longtime president, Wayne Hayden, who passed away not long ago.

“We want to do our best on this build … to honor him,” she said.

Bruce Holt is the construction manager on the project.

Habitat for Humanity of Jessamine County began in 1992 and merged with the Garrard County affiliate in 2018. This will be its 17th home in Jessamine. It currently has 38 homeowners in the two counties. It is affiliated with Habitat for Humanity International, an ecumenical group founded in Americus, Georgia, in 1976 to help disadvantaged people build their own homes. By using volunteer labor and donated or discounted materials and services, it can build houses for less than the typical market cost, and it provides long-term mortgages at 0 percent interest.

The Nicholasville City Commission formalized its departmental responsibilities Monday night, which shuffled all four commissioners. Each of the four city... read more