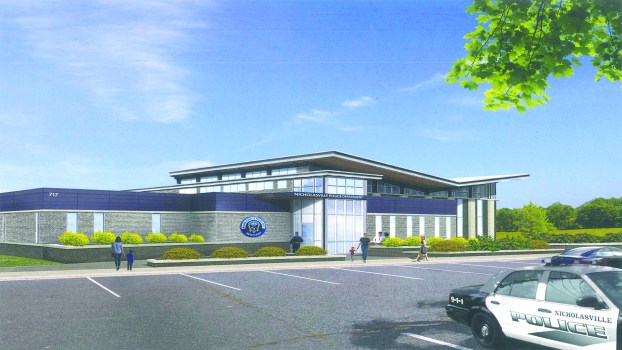 An artist’s rendering shows the front of the planned new Nicholasville Police Department to be built on North Main Street. A groundbreaking for the project is set for later this year. (Photo submitted)

The last major part of planning for Nicholasville’s new police station should be in place Friday, when the construction bids are opened for consideration.

The bid opening is scheduled for 2 p.m. Friday, Nicholasvile Police Chief Todd Justice said. Early estimates for the project were $7.14 million, he said.

When the new building is completed, it will cover 22,000 square feet. Of that, there will be 1,600 square feet of public meeting space with the rest dedicated to the Police Department’s needs.

“It’s everything we need,” Justice said previously. “Compared to what we have now, this is light years ahead.”

If all goes according to plan, construction would begin between mid-July and August, Justice said. A groundbreaking is tentatively scheduled for July 16 at the new site on Main Street.

On June 23, the Nicholasville City Commission approved an amendment to the project manager contract with Hayden Company to set a maximum amount.

Construction, he said, is expected to take about 14 months.

The main level of the building will include the public meeting space, room for departmental records and offices for detectives and narcotics officers.

The lower level will have a fitness room, space for the patrol officers and evidence storage.

Earlier in the June 23 meeting, the commissioners approved the second readings for the city and utility budgets for fiscal year 2021, which begins July 1. The budget calls for $21.3 million in revenue and $27.8 million in expenses, in addition of $5.4 million in other revenue and transfers. The balance will be covered by the estimated fund balance on June 30.

The Nicholasville City Commission approved the first reading of its new budget Tuesday, which projects reductions in revenue for the... read more