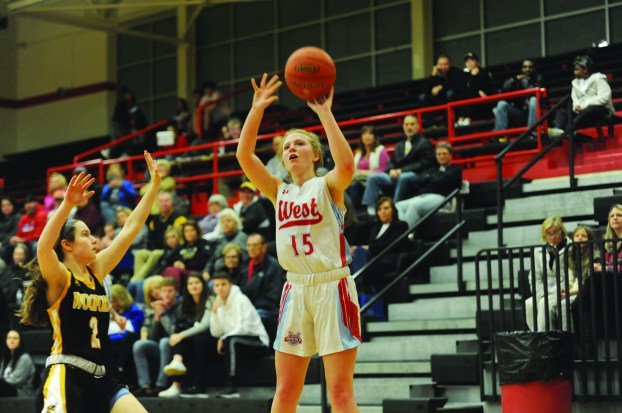 On Monday, the West Jessamine girls basketball team got its last game in before Friday’s meeting with East Jessamine.

The Colts took on a big and athletic Woodford County team who’s full court press gave them fits and led to a 72-36 loss to the Yellow Jackets.

“I don’t know if it was necessarily the size. I feel like ball handling really hurt us today,” first year coach Thomas Chestnut said. “That on-ball pressure and that defense — it really bothered us today. We just have to get better in that area. It seems like anytime we have issues, it comes with teams that have good ball pressure defense. That’s something we struggle with right now.”

While the press gave the Colts fit, Woodford had several big bodies that were able to neutralize leading scorer Aaliyah Edenstrom — while she finished with 10 points, she went into the half scoreless.

One of those low post players for Woodford — senior Delaney Enlow — finished with 19 points, despite being the focus of West’s defense.

“We had a gameplan coming in. We knew what they were up against,” Chestnut said. “We knew they had some size down low. We were really focused on 54 (Enlow) — we had a gameplan for her. She scored 19 tonight, I think, but they had a great team effort.”

Only one Yellow Jacket failed to get in the scoring column and Woodford coach Erik Daniels was able to play everybody.

“They had a great team win — she was their leading scorer,” Chestnut said, talking about Enklow. “But if we could have minimized the other scoring a little bit, we can live with 19 from her. But unfortunately, (13) out of however many they had ended up scoring.”

One thing that Chestnut said has been a positive has been the play of Alleyse Steinkuhl and Kate Reed.

Steinkuhl has taken on a new role for the Colts, and as she grows and gets comfortable in it, will be able to help with what Chestnut identified as his team’s biggest weakness — breaking the press.

“We had talked early on in the year. We’d talked about Alleyse moving out to the wing and handling the ball a little more than she’s used to,” he said. “So here lately, Alleyse has really come on with handling the basketball. She’s still not comfortable with it all the way, but she’s a team player. She does what we need her to do and she trusts me. That’s the biggest thing. I tell her she’s going to make some mistakes, don’t worry about it.

“She’s really been aggressive with the ball. She’s driving a lot, and finishing at the basket. She’s a great free throw shooter so it helps when she can get to the line. She’s really doing well for us the last couple of games.”

Reed has also come alive in the last few games, and is currently the team’s second leading scorer — averaging around nine points a game, which she scored Monday night.

“Kate’s a baller. I’m trying to get her to be more aggressive — with her shot and with the ball,” Chestnut said. “She’s also picked it up for us the last few games. She’s starting to get comfortable with the ball in her hands and understanding what I need from her. She’s just been playing her butt off. I couldn’t be more happy with those two.”

Monday’s loss comes after a win at Estill County on Saturday. Edenstrom had a dominant game, scoring 16 and grabbing 20 rebounds to lead the Colts to a 55-49 win. Steinkuhl also had 10 boards, and finished two points shy of a double-double while Reed had 15 points in the effort. Delaysia Thomas added 11 points for West.

The day before that, West fell to a tough Great Crossing team that is currently on a five game winning streak.

On Friday, Chesnut’s Colts will take on rival East Jessamine at 6:00 p.m. for the first half of a double header.

East and West Jessamine honored their seniors together with a a joint Senior Night slate of matches on Tuesday, Jan.... read more