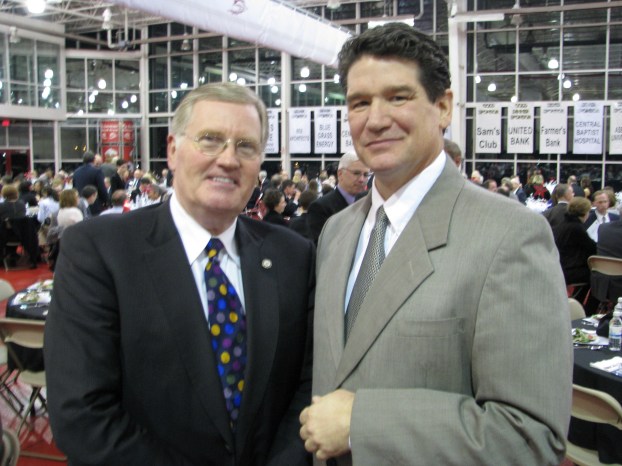 Jessamine County Judge-Executive David West and Sen. Tom Buford were life-long friends. “Not only personally have I lost a friend, but Jessamine County has lost a great friend and a statesman,” West said.

The measure of a true statesman

Jessamine County Judge-Executive David West,  a long-time friend of Sen. Buford, explains why he was particularly taken aback by the news of his death. “I talked to him Monday, before he died on Tuesday, for about 20 minutes,” West said, describing Buford as “the same upbeat Tom he always was.”

“After that, he even sent me a photo of himself, sitting in the hospital garden…the next morning, he died. That was a shocker to me.”

West has been friends with Buford for his entire life; their fathers were friends. “Our children were raised up together, we ate together once or twice a month. I spoke to him over the phone quite often. Half of it was friendly talk and the other was business.”

West said there are numerous professional accomplishments surrounding Buford’s career. “But one of the first things I think about is that we’ve lost a man of a thousand stories … he knew the history of Jessamine County and its people, its politics — not only Jessamine, but on a state level.”

To be re-elected for 30 years is a huge accomplishment in its own, West said, especially when there are only 38 senators. “He had a warm way about him. Not only personally have I lost a friend, but Jessamine County has lost a great friend and a statesman. And he didn’t always vote along party lines. He would weigh an issue and vote accordingly, which — to me — is the measure of a true statesman.”

FRANKFORT, Ky. – Democratic Gov. Andy Beshear has picked up a Republican opponent for his anticipated 2023 re-election bid, in... read more