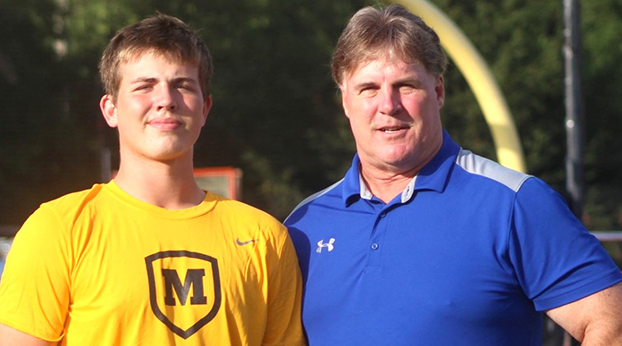 Josh Kattus with his father, Eric, a former NFL player.

Little things can make a big difference in recruiting.

Still, I cannot remember having a graduate assistant coach play a more prominent role in a player’s commitment than what happened with Cincinnati tight end Josh Kattus, a three-star prospect, picked Kentucky.

Once Kattus got his UK scholarship offer, he stayed in contact with Conrad who is also from Ohio.

“Hearing him talk about (tight ends) coach (Vince) Marrow and how much he enjoyed playing for him was big. He said, ‘Trust me, you are going to enjoy it here. He will treat you well. He knows what he is doing and the tight ends are a brotherhood.’ So C.J. did heavily influence me,” Kattus said.

Another big influence was UK sophomore defensive back Carrington Valentine, who played at Moeller High School like Kattus.

“We are pretty cool friends. He talked to me a couple of times about coming to BBN. He definitely helped me with my recruiting,” Kattus said. “He was the one who maybe helped the most with them getting hold of me.

“I played with him when I was a sophomore when he was a senior. Coaches told me he is going to be playing a lot and is going to be a big-time player at corner.”

Kattus is Kentucky’s only tight end commit in the 2022 recruiting class. He liked what he saw of UK’s spring practice film and another former Moeller player, tight end Brenden Bates, said the new UK offense under Liam Coen will feature the tight ends a lot more.

Kattus has talked to Coen and likes what he has heard and seen about the former Los Angeles Rams assistant coach.

“I am excited about what he is going to bring to Kentucky. I think Kentucky football fans are really going to like him and his offense,” Kattus said.

“He is a great guy. He has told me what he likes about me.”

Kattus’ father, Eric, was a tight end at Michigan in the mid-1980s and he was drafted and played in the NFL for the Cincinnati Bengals.

“I leaned on my dad for advice along with my high school coach,” Kattus said. “My dad was recruited heavily in his high school career. He gave me some tips along the way and basically said go someplace where you will fit in and know your coach will be there for a long while. I know the UK coaches will be there for me.”

His high school coach, Mark Elder, is the former head coach at Eastern Kentucky University and was an assistant coach at Tennessee, Cincinnati and Central Michigan. Kattus also “leaned” on him for recruiting tips.

“He has a lot of connections,” Kattus said.

Kattus had 23 catches for 288 yards and four touchdowns in eight games last season. However, he’s about more than catching passes.

“When I get my hands on people I finish the block,” Kattus said when asked what he does best. “That is something big that they really want you to be able to do in the SEC. You have to be able to block. A lot of guys can run routes and catch, but if you put your hand down and block, too, then you have a great chance to have a long career. My dad made sure I understood that a long time ago.”

Young receivers could contribute for UK next season

Two freshmen receivers who might find a way to help UK’s offense next season are Christian Lewis of Alabama and... read more