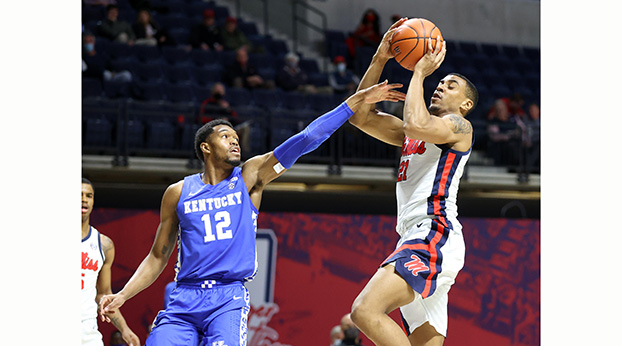 Cats fail to fight back against Ole Miss, fall 70-62

Kentucky got shoved around and didn’t fight back in a 70-62 loss at Mississippi Tuesday night.

The narrow setback was the second straight for the Wildcats with one game remaining in the regular season. Kentucky (8-15, 7-9 Southeastern Conference) reeled off three constructive victories before back-to-back setbacks to Florida and Ole Miss. The Wildcats host South Carolina in a makeup game to conclude the regular season Saturday and hopes of making an appearance in the NCAA Tournament keep dwindling with each loss.

“It’s just disappointing, because we’ve just got to worry about us being our best and (we revert),” Kentucky coach John Calipari said. “This is another game we could (have won). We’ve had one game where I had a bad game playing against Alabama the first time (at home). Every other game we could have won, probably a bunch of we could have lost too. if you fight, you win.”

Although Kentucky committed just seven turnovers and had 16 assists, the Rebels used their superiority on the glass to defeat the Wildcats. Ole Miss outrebounded the Wildcats 42-28 and collected 31 defensive rebounds. The hosts limited Kentucky to mostly just one shot on the offensive end.

“You get beat by 60 rebounds, you’re not winning,” Calipari said. “(The) guys act like (they) want to win, then (they have to) go get those rebounds. We started the game. We didn’t rebound. We were down seven rebounds or eight at half, I think. The (entire) game plan was just like Tennessee. You have to fight and take that out of the game … That (rebounding) was the game.”

The Wildcats also struggled at the free-throw line and made just 15 of 25 shots from the charity stripe. The Rebels missed just three on 19 attempts, another difference-maker in the contest.

“We had a chance,” Calipari said. “We had to make a free throw. I got mad. Normally, I don’t do much on that, but I had enough of missed free throws.”

Prior to the past two setbacks, Calipari thought the Wildcats were starting to turn the proverbial corner, but he added that his squad simply is “just not cracking yet.”

“We were right on the edge of pushing over the edge to go the right way and be right there and do some crazy stuff, and then they revert back to what is easier, what they’d rather do,” the Kentucky coach said. “Normally my teams understand (what it takes to win at the end of the season).”

Calipari said the Wildcats still have time to salvage the season with the Southeastern Conference Tournament looming next week in Nashville. Winning four straight in Music City is the team’s only hope of making the Big Dance this season.

“It’s not over until it’s over,” he said. “We got one on Saturday and we got a league tournament.”

In the final week of a disappointing regular season, Kentucky senior Olivier Sarr said the Wildcats still have a lot... read more