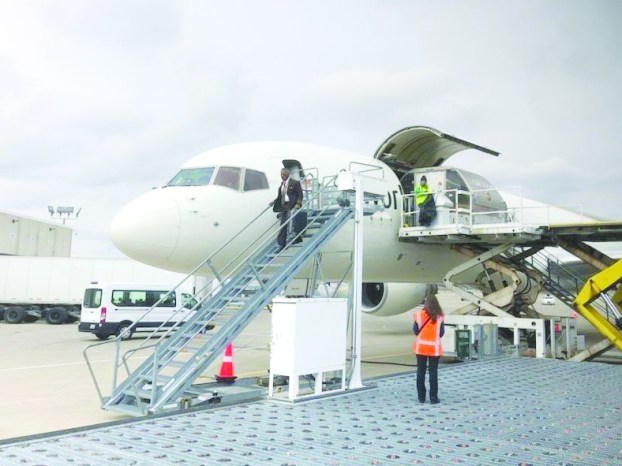 The first shipment of the COVID-19 vaccine arrives at the UPS Worldport in Louisville. (Governor's Office photo)

Sunday saw a major milestone in the fight against COVID-19, as the first shipment of vaccine arrived in Kentucky.

The initial shipment of the two-dose Pfizer-BioNTech vaccine was delivered to Louisville’s UPS Worldport. It was the first vaccine to win approval by the U.S. Food and Drug Administration, receiving final regulatory approval Friday evening.

“The Pfizer vaccine, which we believe to be 95 percent effective, has now been authorized in this emergency for us to start vaccinating individuals,” said Gov. Andy Beshear. “Kentucky is going to play a major role in getting this vaccine to people all over the eastern United States through UPS’ Worldport. We in the Commonwealth are excited to be a big part of defeating this virus all over this country. We now believe that the first individuals will be vaccinated here, Monday morning. We are less than 24 hours away from the beginning of the end of this virus.”

In this first shipment, Kentucky is receiving 12,675 vaccine vials, which are making their way to 11 regional hospitals, in Louisville, Paducah, Bowling Green, Madisonville, Pikeville, Corbin, Lexington and Edgewood.

An additional 25,350 are being delivered to CVS and Walgreens, destined for long-term care facilities in the state.

Approval is also expected in the coming week for the Moderna vaccine, which is also reportedly 95 percent effective and doesn’t require the extremely cold storage that Pfizer’s does. This means Kentucky could receive 150,000 doses of vaccine during the month of December, which the governor is celebrating as great news after a long and tough year.

In the initial rounds, local hospitals, as well as long-term care facilities, which have not yet been announced, will be following guidance issued by the Advisory Committee on Immunization Practices, or ACIP, which advises the Centers for Disease Control and Prevention. ACIP is prioritizing vaccinations among health care staff members who have been the only line of defense treating patients and long-term care residents and staff, who have been at high risk and greatly affected by the spread of the virus.

With 66 percent of the deaths coming from long-term care facilities, vaccines could help significantly lower Kentucky’s COVID-19 deaths beginning in January. Because long-term care residents tend to require the most care, vaccinations in these facilities will help reduce COVID-19’s burden on the health care system, which is in danger of becoming overburdened in some parts of the state.

Local health departments have also been working closely with the Governor and State Public Health Commissioner Dr. Steven Stack to prepare for these distributions.

Gov. Beshear said to get back to the lifestyle that we have missed, Kentuckians need to be vaccinated. “Our community doctors and nurses, as well as long-term care residents and staff, are preparing to do their part first. We will all get a turn. When it is your turn, I strongly encourage you to get vaccinated so you can do your part to protect yourself, your family, and our entire state.”

The phases in which Kentuckians will get vaccines, and the timing, is still unfolding. But, Kentuckians can get the facts about the vaccines and latest distribution information at kycovid19.ky.gov.

With this information and by talking with a health care provider, Kentuckians can make plans to get the vaccine when the time is right.

The governor added, “There are still months to go in this battle with the pandemic, but in this historic week to which we are all witness, we can celebrate having turned a corner to a brighter, better Kentucky.”

In any other year, groups would go into nursing homes to sing Christmas carols to the residents and spread a... read more