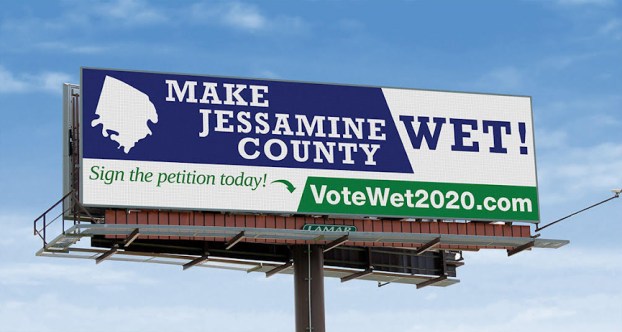 Billboards like this one on U.S. 27 have been urging voters for months to support legal alcohol sales in the unincorporated area of Jessamine County. The petition has succeeded in getting the number of signatures it needs. The Jessamine County Fiscal Court was expected to vote on allowing the sales at its meeting Tuesday afternoon.

The petition to allow alcohol sales in Jessamine County outside the city limits of Nicholasville and Wilmore has met its goal.

Now the voters will get to decide whether beer, wine and spirits can be sold in the unincorporated areas when they go to the polls Nov. 3.

Mollie and Tom Jameson, owners of Bellerive Plaza on Harrodsburg Road (U.S. 68) near the Fayette County line, led the effort to get enough signatures to put the question on the ballot this fall. A similar campaign fell a little short in 2019.

This time they needed 4,733 signatures, or 25 percent of the number of voters who voted in the last election, and they far exceeded that number, with 5,558.

“We felt that if we didn’t get it done this time, then we would never get it done,” Tom Jameson said July 29. “We hope the electorate will vote it in, and we will be in a new era.”

The wording of the question is simply: “Are you in favor of the sale of alcoholic beverages in Jessamine County?”

Jessamine County Judge-Executive David West said County Clerk Johnny Collier certified that the signatures are valid, and the petition would be presented to the Jessamine County Fiscal Court at its meeting Tuesday afternoon for the magistrates to decide whether it should be on the ballot.

The Fiscal Court meeting occurred after the print deadline for this issue of The Jessamine Journal, but the decision will be reported online.

If it is on the ballot and voters approve the referendum on the general election ballot, alcohol sales would be allowed everywhere in the unincorporated area of the county, which means anywhere outside the city limits.

Cities decide on their own whether to allow alcohol sales. Nicholasville has long had alcohol sales, but Wilmore doesn’t and would remain dry.

There are a few places in the country where alcoholic beverages can be sold on a limited basis, such as wineries and golf courses.

The Jamesons wanted legal alcohol in the county because their shopping center has a Kroger that can’t sell beer, wine or spirits like the other Kroger stores in the area. It was hard to attract restaurants to the shopping center because they couldn’t sell alcohol by the drink — something most restaurants that aren’t fast food franchises need to be profitable, they said.

Others who are advocating for alcohol sales include a historic bed and breakfast in Keene, Taylor Made Farm, a race horse operation that hosts tourists and guests for events, a country store near Valley View and the Jessamine County Chamber of Commerce.

In a prepared statement, Mollie Jameson touted the economic and governmental benefits of countywide alcohol sales: “Allowing alcohol sales throughout the county will keep tax dollars and revenue right here in Jessamine County, instead of neighboring ones. It will also attract new businesses to the county to help existing businesses expand.”

There was no vaccine or treatment for the deadly virus that infected millions of people around the world and claimed... read more