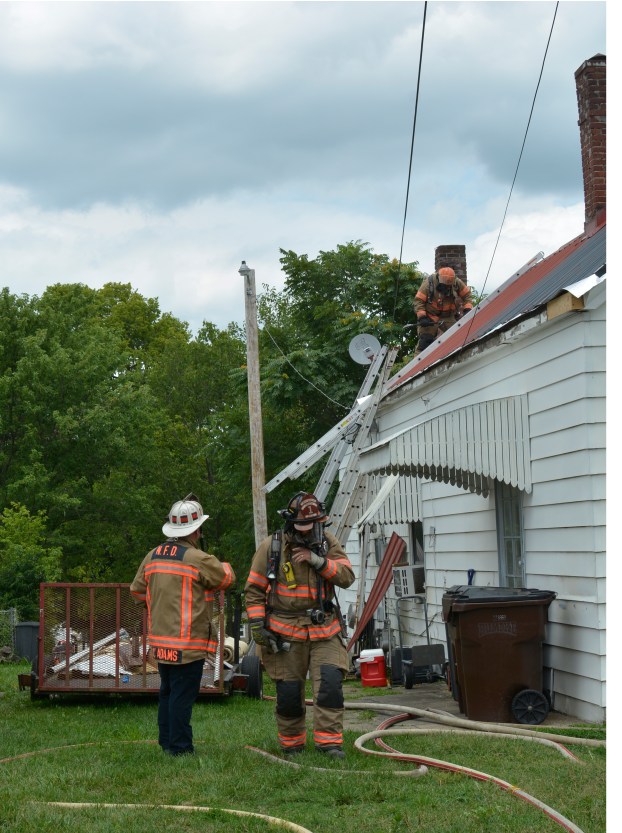 Fire damaged a house on Brown Street Wednesday afternoon, but no one was injured.

Some workers accidentally set fire to the roof of an old wooden house at 119 W. Brown St. in Nicholasville Wednesday when a grinder ignited some insulation, Nicholasville Fire Marshal David Johns said.

The incident happened about 1:20 p.m.

Firefighters from the Nicholasville Fire Department and the Jessamine County Fire District were on scene, along with Nicholasville Police.

Battalion Chief Johnny Adams said the house was being renovated, and the workers had disconnected the electricity to the residence before work to replace a gutter.

When firefighters arrived, there was light smoke showing, and there were two “hot spots.” They made access through the roof to extinguish the fire.

Being an older house that had been reconstructed, it had two roofs and two ceilings.

“There were people still inside when we got here, but we got them all out,” Adams said.

No one was injured.

Adams said the American Red Cross had been contacted in case the family needed somewhere to stay.

The petition to allow alcohol sales in Jessamine County outside the city limits of Nicholasville and Wilmore has met its... read more