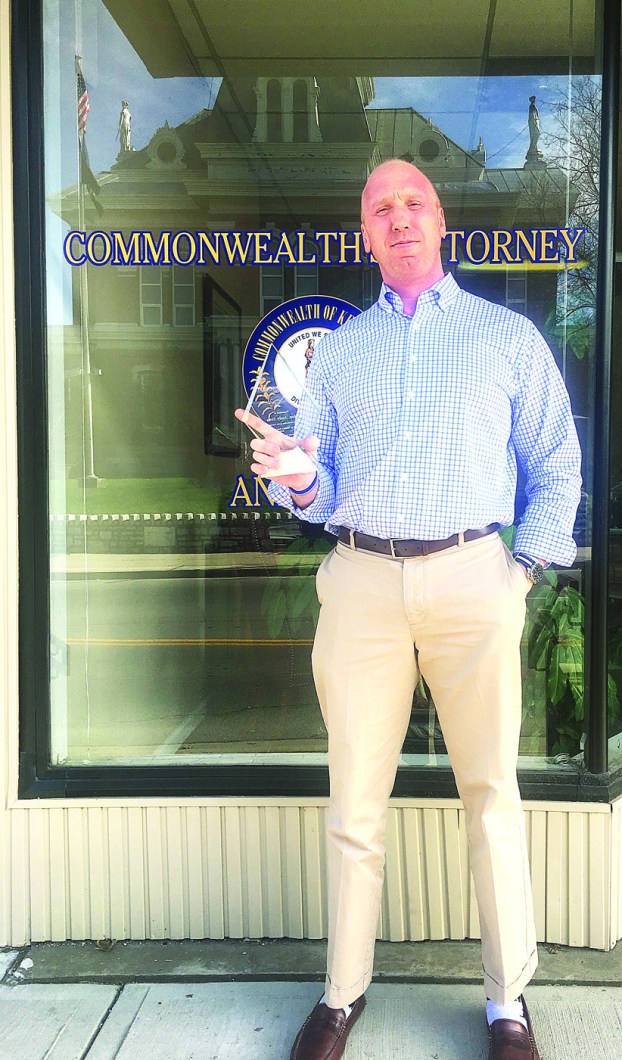 Every case is an opportunity to make a difference

Andy Sims’ motto is “every case is an opportunity to make a difference.”

As the Commonwealth’s attorney for the 13th Judicial Circuit serving Jessamine and Garrard Counties, Sims was recently awarded for doing just that.

Sims was presented the Sword of Justice Award at the annual winter conference for the Commonwealth Attorney’s Association.

Sims said winning the recognition, given annually to one Commonwealth attorney, was humbling.

“It is a big honor,” Sims said. “I haven’t held this position very long. It meant a lot that they thought I was doing a good enough job. Some victims in past cases helped in my nomination letter. They were happy enough with the resolution of their cases to nominate me. It was really humbling.”

For Sims, the safety and well-being of Jessamine and Garrard counties are his greatest concern.

Fighting crime and the opioid epidemic are high on his list, he said.

“During my time as Commonwealth’s attorney, we have seen amazing things happen to effect positive changes for the good, but there is still a long road ahead,” Sims said. “My office works closely with our tremendous local law enforcement agencies to protect the citizens of this wonderful community. My utmost concern is to serve the victims and families that find themselves thrust into the often confusing and highly emotional criminal justice system.”

Sims said the goal of his office is to do everything in its power to get Jessamine and Garrard county families justice and a sense of closure. The cases that come through his office are not simply files on his desk, he said. Every case in his office represents a traumatic event in the lives of the individuals he serves.

“As long as I am the Commonwealth’s attorney, we will never lose sight of that fact,” Sims said. “Throughout the stressful criminal process, these are people who I have come to know and love. I am so humbled they thought enough of me to make this possible. I want to dedicate this award to them.”

Sims has served Jessamine and Garrard counties for 15 months as Commonwealth attorney and handled a caseload of more than 300 cases with only one part-time assistant. Recently, Sims was able to hire a new full-time assistant, Elizabeth Kidd, who has practiced law for more than 10 years.

A longtime resident of Lexington, Kidd has worked in the past for the Department of Public Advocacy and spent time in private practice. Kidd was also selected as the 2015 Jessamine County Attorney of the Year.

“I have been a part of the legal community in Jessamine and Garrard counties since 2006, so I am honored Andy Sims has given me the chance to serve these communities as an assistant Commonwealth’s attorney,” Kidd said. “I am very excited about this opportunity, and I believe my experiences over the past 12 years will guide me in my new role as a prosecutor.”

Sims said he feels blessed to be able to add Kidd to his team.

“We feel very fortunate to be able to welcome Elizabeth to our staff,” Sims said in a prepared statement. “She brings a level of experience, integrity, and professionalism to our office that is consistent with the values we strive to uphold.  I feel confident that the citizens of Jessamine and Garrard counties will benefit immensely from this addition.”

West Jessamine High School will have a new boss when students walk through the doors this fall. Jessamine County Schools... read more