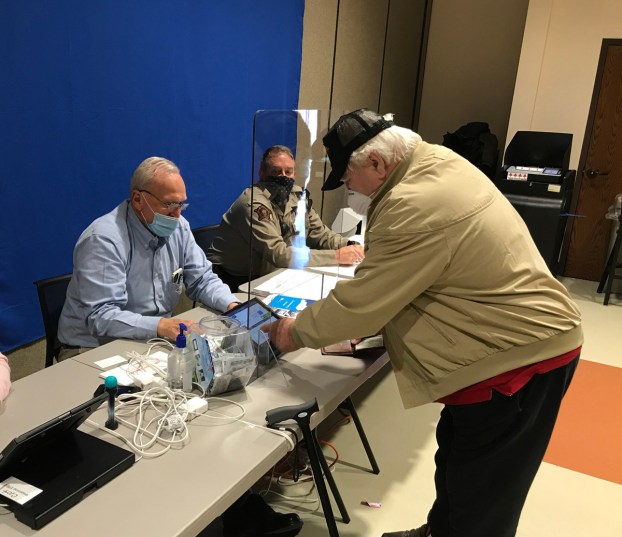 Seldom Little, right, signs in before casting his ballot Tuesday afternoon at the Jessamine County Public Library. At 2:15 p.m., about 10 people were lined up outside the library for their turn to vote. (Photo by Fred Petke)

In a night that saw better than 50% voter turnout in Jessamine  County, established candidates carried the day.

President Donald Trump, U.S. Senator Mitch McConnell, and U.S. Reps. Andy Barr and Brett Guthrie all won easily by securing more than 60 percent of the votes in their respective races.

The three incumbent Nicholasville city commissioners, Patty Teater, Alex Carter and Betty Black all placed in the top four, with Bethany Davis Brown placing as well. At least one new person will join the commission after current commissioner Doug Blackford did not seek another term.

Jessamine County Clerk Johnny Collier said the results won’t be final until after 4 p.m. Friday. Any absentee ballots postmarked Nov. 3 and received by 4 p.m. Friday will be counted.

Collier estimated there were about 100 absentee ballots which have not been returned. There bigger races shouldn’t change, he said, but some of the city commission and city council seats could change.

“Anyone within 100 votes could change,” he said. “The city commission could change, but the other races should stay.”

Collier said about 9,000 absentee ballots were sent out for this election.

The day, he said, went well. Early voting was heavy, but remained steady throughout the day.

Wilmore Mayor Harold Rainwater said he went to vote at Wilmore Elementary Tuesday morning. At 6:10 a.m., there was nowhere to park and the line of voters wrapped around the building four times, he said.

“It took an hour to get through the line,” Rainwater said.

Still, Rainwater said he liked how the election went this time with early voting and expanded absentee voting.

The results include all six voting locations, absentee, walk-in and mail-in ballots.

Last Friday was a busy election day in Jessamine County. So has been almost every day since early voting at... read more