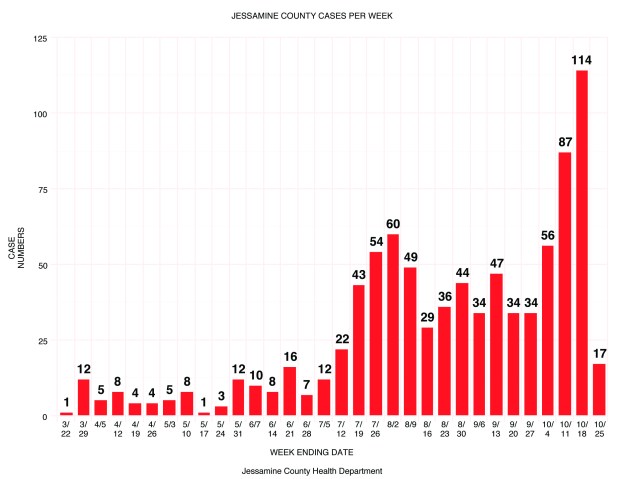 In the red zone: Jessamine seeing spike in COVID cases

Jessamine County is seeing a spike in cases of COVID-19, adding more than 100 new cases of the potentially deadly virus and five deaths last week.

According to data from the Jessamine County Health Department, there were 114 new cases reported the week ending Oct. 18, breaking the record for the most cases reported in a single week.

The previous highest single-week reporting was 87 cases the week ending Oct. 11, marking a noticeable increase in cases this month.

According to the Health Department, there have been 221 new cases reported this month alone.

As of Tuesday, which is The Journal’s press deadline, there had already been 17 new cases reported this week, bringing the total in the county to 876.

Of those cases, 142 were active, 727 have recovered and five were hospitalized.

There have been seven deaths reported overall in the county.

The spike in local cases comes on the heels of the announcement last week that staff and residents at the Thomson-Hood Veterans Center in Wilmore had tested positive for the virus.

According to the state’s COVID-19 long-term care update, as of Tuesday morning, there had been 83 cases among residents and 42 cases among staff members reported at the center.

Public Health Director Randy Gooch said the uptick in local cases has a direct correlation to the spread of the virus at the veterans center.

“If you actually look at the case rate and deduct the cases out from Thomson-Hood, our incidence rate never goes above 25,” he said. “That means there’s a direct correlation between the outbreak at Thomson-Hood and the community being in the red zone.”

He asked the community to be cognizant that community spread can impact congregant care facilities, like nursing, retirement and rehabilitation homes, where there are vulnerable members of the community living.

“What we see is that once it gets into those settings, the transmission seems to be more rapid and we have a much higher level of cases that occur because these individuals are living in close quarters,” he said.

While there is a large number of community members quarantined because of contact that occurred at school, Gooch said the county isn’t seeing many actual positive cases attributed to schools.

“We’re not seeing a large number,” he said. “However, we are seeing some positive cases in students and employees and that is causing an extraordinary number of people to be quarantined. We collaborate with the school district almost daily and they are taking steps beginning Oct. 26 to make students have more room to social distance and attend on an alternating schedule.”

Gooch said those measures could slow transmission and reduce the number of people who would need to quarantine if someone were to test positive.

Jessamine, Kentucky in the red zone

Because of the increase in cases, the state has classified Jessamine in the red zone for its incidence rate.

Counties with an incidence rate of 25 or higher are classified in the red zone. Jessamine’s rate was 28.2 as of Tuesday morning.

According to the Department for Public Health, “The seven-day incidence is calculated by taking the total number of unique cases in each county over the past seven days, divided by seven to get a daily average, divided by the U.S. Census Bureau county population, and multiplied by 100,000 to get the incidence per 100,000 people.”

Jessamine was also among 31 counties listed in the red zone as of the White House’s Oct. 11 Coronavirus Task Force Report, and was among the top 12 counties for its incidence rate.

Overall, Kentucky is also listed in the red zone on the task force’s report, indicating 101 or more new cases per 100,000 population last week, and is 12th in the nation for both the number of new cases and the positivity rate.

The state is 33rd overall for new deaths per 100,000 population last week.

As Jessamine sees a rise in cases, so does the state as a whole.

Saturday, Gov. Andy Beshear reported the highest numbers for a Saturday on record, with 1,295 of newly reported cases that day. He said that was the fourth highest single-day number of new cases as well.

“Things are not moving in the right direction; they continue to escalate,” Beshear said during his Saturday press conference. “This virus is our enemy, not each other.”

On Monday, Beshear reported 641 new cases, the most ever reported on a Monday in the state.

As of Tuesday afternoon, there had been 88,247 confirmed cases of the virus in the state, and 1,326 deaths attributed to it.

Statewide, the majority of cases are among those 20 to 29, accounting for at least 16,883 of the total cases, but there has been only one death reported among that age group.

Those aged 80 and older, which is the age group with the fewest reported cases, have accounted for the most deaths. There have been at least 4,329 cases reported in this age range, but 653 deaths.

Additionally, Beshear said there are more Kentuckians hospitalized and in the intensive care unit because of complications from the virus than ever before.

“October is on pace to be our highest ever number of coronavirus cases reported within a month,” said Dr. Steven Stack, commissioner of the Department for Public Health. “We’re in the midst of an escalation in cases, and our hospitalizations are increasing now, too. As the holidays approach, it’s imperative to limit further spread. Practice social distancing, wear a face covering and practice good hand hygiene to reduce your chances of contracting COVID-19.”

There have been 5,353 tests conducted locally, and of those who have tested positive, 60 percent have been asymptomatic.

The Health Department is still offering drive-through testing by appointment only. To schedule an appointment, call 859-885-4149.

Effective measures to slow spread are out there

Gooch said there are some simple, common sense things community members can do to slow the spread of the virus in the county.

He said the community has mostly been compliant with these recommendations, but there are some who are “obstinate,” especially in regards to mask wearing.

Gooch said wearing a mask is a small sacrifice to make to protect the more vulnerable people in the community.

“I think what this outbreak at Thomson-Hood reminds us is that we do have an extraordinary population of people in the community who are vulnerable,” he said. “In this situation, we know that these veterans made a great sacrifice for our country. I think it’s a very small thing to ask an individual to mask up and social distance and to do the right things to protect their family, friends and community.”

At least five of the 83 residents of Thomson-Hood Veterans Center in Wilmore who contracted COVID-19 have died from the... read more