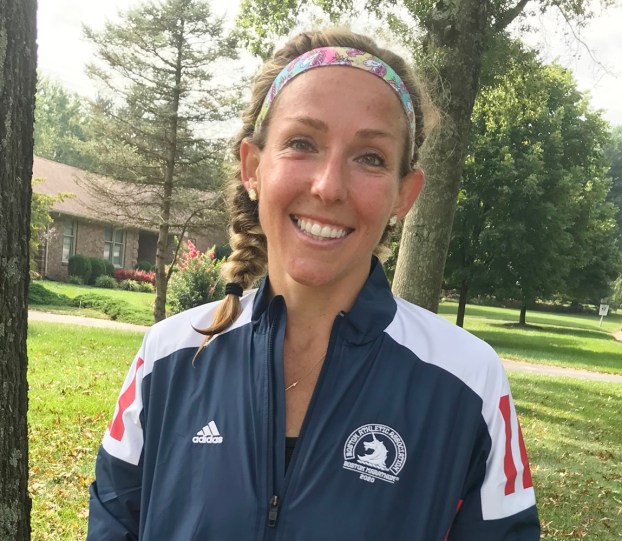 Liz Combs poses in her finisher jacket after completing the Boston Marathon virtually on U.S. 68 in Jessamine County.

Liz Combs qualified to run the Boston Marathon this year, but because of the coronavirus, respiring and perspiring alongside 30,000 other runners just wasn’t going to happen this year.

She was not alone.

Her brother, David Marshall, bicycled part of the way with her, and friends ran with her a few miles.

Along the way, supporters gathered to provide water and cheer her on.

“Typically, running a marathon is kind of a lonely experience,” she said, but “this was definitely the most social and the most enjoyable marathon I’ve ever done.”

It was her sixth.

“I run a lot of half-marathons,” she said. “Running half marathons is fun. Running full marathons is not. I try to say away from the fulls as much as I can.”

But she couldn’t stay away from the Boston. It was one of those bucket list things.

Combs, 36, qualified in April, but the COVID-19 pandemic struck in March.

“The training usually ramps up three weeks before, and I had just made it to that final, keeping that training pretty intense, and then they canceled it just about three or four weeks out from the race,” she said.

At first it was going to be postponed from the usual third Monday in April until September, but in late May, they made the call to cancel it and have a virtual race for those who had qualified and registered.

It was the first time in the 123-year history of the world’s oldest annual marathon that it had ever been canceled. Even after it was bombed by Chechen nationalists on Patriots’ Day 2013, the race had come back stronger the following year with 10,000 more participants, a near record number.

Because she lives in Jessamine County, Combs ran her race along Harrodsburg Road (U.S. 68), most of it on the multi-use path that runs parallel to the scenic highway. She ran north into Fayette County, then south to the Wilmore Y.

“It was hillier than I anticipated,” she said. “I ride my bike on that trail often, but it’s a little different when you’re on foot.”

It was warm and humid that day, but overcast. She was grateful the sun didn’t break through the clouds while she was running.

Combs said she did “fairly well, considering” that she ran without any other competitors. She did it in three hours and 52 minutes — a little over her best time, which is close to 3.30.

She also was happy for another reason. The event raised money for the Jessamine County Food Pantry.

When she was going to run the race in Boston in April, she said, it was “self-serving.”

“I was running just for myself … to cross that off my to-do list,” she said.

But when it became a virtual race, she said, she “decided to turn lemons into lemonade and bring some meaning” to the challenge.

The support was overwhelming and came from all over the country, because the funds were raised through Facebook, she said.

“It was really cool because a lot of people from Jessamine County, even though they don’t live here anymore, wanted to contribute to that cause because of the good work the Food Pantry was doing, especially during the pandemic,” she said.

“In college, I probably could not have run more than a mile without stopping,” she said.

After graduating, she began with a walk-run program, and “it kind of grew from there,” she said.

In high school and college, Elizabeth Marshall, daughter of Doug and Nela Marshall, was a competitive swimmer. She was on Asbury’s swim team until she transferred to the University of Kentucky to study dietetics and nutrition, and has been on the university’s faculty for the past 10 years. There she is now known as Dr. Combs.

A lifelong resident of Jessamine County, Liz is married to Brandon Combs, director of admissions at Asbury University. They have a son, Will, 8, and a daughter, Ellie, 4.

The children also like to run. When she goes to competitions in Lexington, “they want to go out and race too,” and will do the accompanying kids’ runs and like getting the T-shirts and medals.

The day of her big race, they were as excited as she was, she said.

“They loved making signs, and they drew the finish line with sidewalk chalk,” she said of the kids. “They came out at several points and cheered, and it really was just a full-on family experience.”

“We will wait and see what’s to become of 2020’s racing schedule, and if the opportunity presents itself to race the Boston again in 2021, I will definitely be there toeing the line,” she said. “And if not, then I love the many races here in Lexington. And I just look forward to the time we can all be back together during an event, whenever that time is.”