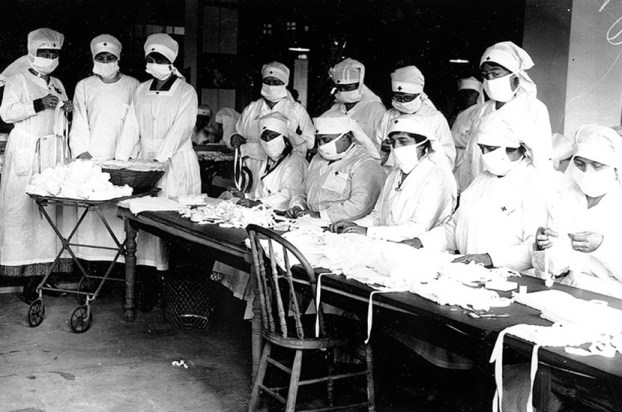 Red Cross volunteers in Boston were enlisted during the 1918 flu pandemic to assemble gauze masks because of a shortage of personal protective equipment.

There was no vaccine or treatment for the deadly virus that infected millions of people around the world and claimed the lives of hundreds of thousands in this country alone. The only way to fight it was to close schools, discourage large gatherings and require masks to slow the spread of the contagion.

Many refused to comply, saying it violated their civil liberties.

Government leaders were blamed for being slow to respond because they didn’t want to cause alarm.

It sounds like today’s headlines, but it was more than a 100 years ago, when the last great pandemic disrupted normal life and left no community untouched.

The 1918 flu’s effect on Jessamine County residents is recalled in recently discovered interviews that were recorded 70 years after the pandemic by high school students.

Judy Woolums, Wilmore’s community development director, was recently preparing for the relocation of City Hall from Main Street to the old school building on Lexington Avenue when she came across some materials her predecessor in that office had saved.

“I started boxing up things, and buried underneath other boxes in the office of Margaret Morgan was a bunch of cassette tapes, and on top were file folders that looked like they were transcriptions of the tapes,” she said.

Woolums picked up one at random, an interview with a Jessamine County woman, Rita Mount Marrs, and on the first page, her eyes went to a paragraph about “everybody being sick in 1918,” she said.

“I was just struck by that,” Woolums said. “That started me on the search.”

Woolums learned that the materials were a student oral history project, “Remember When,” led by a Jessamine County High School teacher, Jenny Wilder, in the 1987-1988 school year. The teacher and students had put together a periodical that was done in collaboration with the Kentucky Historical Society, but that group has no record of the publication of a sequel.

The article that includes the stories of Mrs. Marrs and another Jessamine County woman, Grace Teater Overstreet, was written by Jennifer Slugantz, but it doesn’t say whether she was a student or a teacher.

Rita Mount Marrs was born in 1908 and moved in 1913 with her family from McClain County to Lexington, where she graduated from the old Lexington High School and the University of Kentucky. She later moved to Jessamine County, where her husband, Marlin Marrs, an Army officer and veteran of World War II, ran a farm implement company.

She was an accomplished artist and a member of the Lexington Art League, Nicholasville Christian Church, and women’s and homemakers’ groups. She died in 2006, having lived for almost a century.

In the periodical, Mrs. Marrs tells her story, but not the part about surviving the Spanish flu when she was 10 years old.

At the time of the interview in 1988, she lived on Keene Road and had been a widow for two years.

In the interview, Mrs. Marrs said nobody in her family served in World War I, but she remembered when it ended in 1918. She was 10 years old, and remembered a celebration in downtown Lexington that frightened her because it was so loud, the crowd was frenzied, and they hung the kaiser, the German king, in effigy on Cheapside as she watched.

Then she tells about the pandemic.

The passages below are the transcripts verbatim except for correcting misspelled words and punctuation and breaking up long paragraphs.

“My mother and I were sick in 1918 (with) the flu. We had just moved to Lexington. My father was working on the railroad and was not at home. He was up in the (mountains) and a package came. He sent us things in a package every once in a while. M y little brother went to the door and came running back in the house. He said, ‘Oh, I hope it’s a baby.’ My mother said, ‘Oh, no, that’s the last thing we need.’”

“We didn’t lose anybody in our family, but it was terrible. Everybody was frightened — like polio that used to just frighten every year. The flu frightened everybody. It was there, and you just couldn’t escape it. A lot of people died. It was epidemic. No medication for it. Doctors made house calls. They were busy then. Doctors always made housecalls. They even came to the house to vaccinate us.”

Grace Teater Overstreet lived in Garrard County overlooking to Kentucky River during World War I when the flu pandemic occurred.

In her story, Slugantz refers to the contagion as the Russian flu. It was known by various names, most commonly the Spanish flu, but the first case was discovered in Fort Riley, Kansas, according to many sources.

“In 1917 and through much of 1918, a flu epidemic known as the Russian flu became widespread. The disease had other names like the ‘Spanish Lady,’ but the Spanish, who resented the name, called it the ‘Naples Soldier,’ claiming that the flu originated in Italy, but it first appeared in Madrid in September 1917. The flu spread across the ocean to far-flung places, such as the Fiji Islands.”

“The flu hit Jessamine County like a snowstorm. Schools were closed, buildings were fumigated, and masks were worn by soldiers, nurses, policemen and anybody else who went out in public,” the author wrote.

Mrs. Overstreet remembered: “The flu epidemic was bad during the war. There were so many deaths. I was the first one in my family to catch the flu. Then the others got sick, and I had to wait on them. Then I got sicker than I ever was. It was very painful. You would get hot and perspire.”

“My grandmother, who lived about a mile from us, cooked for our sick family. The doctor would come to see us, bringing our food and medicine to us. We had to close school because there was too much flu going around. My friend’s mother died during that time. She gave birth to a baby girl before she passed away. The baby was just five days old.”

“My oldest brother was a premed student and went into the Army. He had the flu too. He said that he was just not going to let it kill him. ‘I am going to fight it to the last.’ He did, and he came out of it, but he had to go out West for a while.”

There is an index of the interviews with Mrs. Marrs and Mrs. Overstreet on the Kentucky Historical Society’s website under a section for Pass the Word: A Project of the Kentucky Oral History Commission (passtheword.ky.gov)

What was then known as the Spanish flu was an H1N1 influenza.

In 2009, there was another H1N1 flu pandemic claimed hundreds of thousands of lives around the world and more than 12,000 in the U.S., according to the CDC.